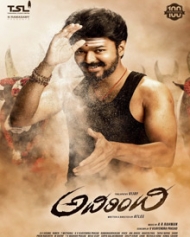 Adirindhi movie is a dubbed version of Tamil movie Mersal and it is a romantic action entertainer written and directed by Atlee and produced by N Ramasamy and Hema Rukmani while A R Rahman scored music for this movie.

The story of the Adirindi moves through the two main characters, Bhargav (Vijay), a sincere doctor who fights against corruption and Vijay (Vijay), a magician who is out for a revenge. Both of them are estranged brothers and once they come together, they get to...