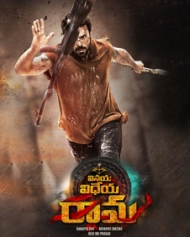 Ram Charan and Kiara Advani are playing the main lead roles in this movie.

Ram Konidela is the youngest among the lot of five brother. They are living as a joint family and leading a happy life. The elder brother of Ram is a strict election officer and things take a change when he gets moved to Bihar, for a special purporse. What happens rest has been narrated in Vinaya Vidheya Rama.