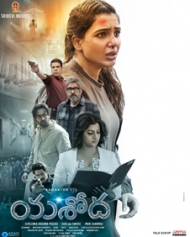 Yashoda is a thriller movie directed by the duo Hareesh Narayan and Hari Shankar. The movie casts Samantha, Varalaxmi Sarathkumar and Unni Mukundan in the main lead roles along with Rao Ramesh, Murali Sharma, Sampath Raj, Shatru, Madhurima, Kalpika Ganesh, Divya Sripada, Priyanka Sharma and many others have seen in supporting roles. The music was composed by Mani Sharma while the cinematography was done by M. Sukumar and it is edited by Marthand K Venkatesh. The film is produced by Sivalenka Krishna Prasad under Sridevi Movies banner.
Story
Parentless Yashoda (Samantha Ruth Prabhu) brings up her sister Brunda (Preeti Asrani) as her child. But Priya, who is taking care of her life, has a health problem and needs a lot of money for the operation. Willing to bear a child through surrogacy for the money needed to protect the younger sister. In this circumference, Miss India dies suspiciously.
What kind of conditions did Yashoda, who was ready for surrogacy, face in the hospital? What are the problems faced by Leela (Divya Sripada), Teju (Kalpika), and other women in the facility along with Yashoda? How did Yashoda react to the injustice done to Leela? Why did facility manager Madhubala (Varalakshmi Sarath Kumar) and Dr. Gautham (Unni Krishnan) turn against Yashoda? What does Union Minister (Rao Ramesh) have to do with the surrogacy facility? How police officers (Shatru, Sampath Raj) investigated the case of Miss India's death. The story of the movie Yashoda is the answer to the question of whether Yashoda has anything to do with the police investigation.
Release Date
Yashoda movie released in theaters on November 11, 2022.