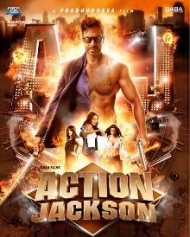 U/A | Action Drama
Release Date : 05 Dec 2014
Cast : Ajay Devgn, Sonakshi Sinha
Director : Prabhu Deva
Synopsis
Action Jackson movie has high octane action sequences and thrills all around. The story is about a small time crook (Ajay Devgn) who gets entangled with a relentless girl who believes that AJ will bring her good luck. The consequences of their relationship forms the crux.

Story in detail
Vishi (Ajay Devgan)is a small time crook who would do anything for money. He is attracted towards Khushi (Sonakshi Sinha),a simple HR executive, who also has a soft spot for Vishi in her heart. One day Vishi who had habit of getting involved in fights, ends up beating a goon, who later attacks him back with his gang.

It is revealed that the person they had beaten is Vishi's lookalike Jay. On another occasion police inspector arrests Jay and hands him over to a group of...