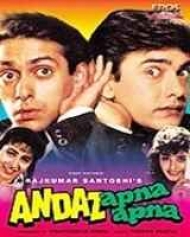 On hearing about the arrival of Raveena, an heiress, in India, they both get into her house, Amar as a man Raveena knocks out, and Prem as his doctor. They both vie for her affections, even though Prem finds himself falling in love with Karishma, Raveena's secretary. Then they run afoul of Raveena's father, a local gangster, who also has an interest in Raveena,and his double-crossing henchmen - and the fun begins.