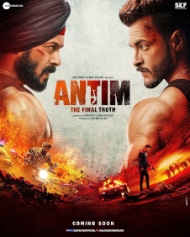 Antim: The Final Truth is a Bollywood drama movie, directed by Mahesh Manjrekar. The movie stars Salman Khan and Aayush Sharma in the lead roles. The film is based on the 2018 Marathi film Mulshi Pattern starring Om Bhutkar and Mohan Joshi.

Salman Khan and Aayush Sharma, coming from polar opposite ideologies; one a cop and the other a gangster, culminating into fiercely feverish encounters and conflicts between the two. Antim: The Final Truth is the journey of a gangster who wants to rise at any cost against a scheming cop who will plot to foil his plans.

Rahul (Aayush Sharma) is embroiled in the world of crime and underworld on a quest to uplift his and his family's life after their farmland is usurped by a scrupulous landowner. He sees the plight of his father (Sachin Khedekar) a former farmer-wrestler and many other farmers who are suppressed and deprived of their rightful ancestral land and the feeling of vengeance further drives him into being a dreadful gangster. He only showcases his vulnerability to his ladylove Manda (Mahima Makwana) a headstrong tea stall owner. However, he sees his biggest obstacle in Rajvir Singh (Salman Khan) a badass and no-nonsense cop who is fighting his own silent battle against the system. How Rajvir and Rahul's principles clash with each other amidst a dark web of crime forms the crux of Antim: The Final Truth.