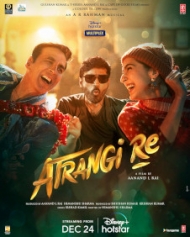 Atrangi Re is a Bollywood drama, helmed by Aanand L Rai. The movie stars Akshay Kumar, Dhanush and Sara Ali Khan in the lead roles. The movie has its music composed by A R Rahman. Story is written by Himanshu Sharma. Atrangi Re is produced by TSeries, Colour Yellow Productions and Cape Of Good Films.

Dhanush as Vasu and Sara Ali Khan as Rinku who are forced into an unexpected union which they both are eager to break away from. However, fate brings them closer through some circumstances until Akshay Kumar's character who appears to be a magician comes into the picture. Sara seems to be in love with Akshay but cannot also run away from her feelings for Dhanush. What follows is a love triangle full of confusion and a truckload of conflicted emotions.

Atrangi Re will be streaming on Disney+Hotstar from December 24, 2021.

The film opens with Rinku (Sara Ali Khan) on the run, being chased by a few men. But wait, this 'toofan se kudi' isn't a damsel in distress. She is bold, strong-headed and doesn't mince her words.

After a 'glass breaking' spree on a railway station and an addition in the number of her failed attempts to elope with her lover Sajid Ali Khan (Akshay Kumar), Rinku's grandmother (Seema Biswas) decides to get her hitched by hook or by crook. Thus Rinku is forcibly married off to Vishu (Dhanush), a senior medical student from Tamil Nadu who is about to get engaged to his dean's daughter Mandy.

Post marriage, Vishu returns back to his college hostel with his new bride Rinku in New Delhi. A series of incidents make him slowly develop feelings for her. However his love story takes an 'atrangi' twist when it's hit by an unexpected conflict.