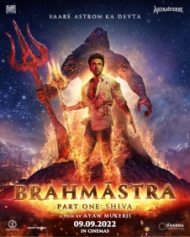 The movie has its music composed by Pritam Chakraborty. The movie is presented by the visionary S.S. Rajamouli in all 4 South Languages: Tamil, Telugu, Kannada and Malayalam. As per Ayan Mukerji Brahmastra "resonates with the ancient wisdom, energies and power.

Brahmastra depicts the story of Shiva who sets out in search of love and self-discovery.

Brahmastra begins with Guruji (Amitabh Bachchan)'s voiceover where the thespian narrates the legend of the Astras and how a group of warriors known as Brahmansh...