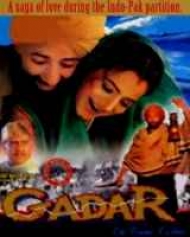 During the Hindu-Muslim riots that erupted soon after the Partition, Tara saves Sakina from a murderous mob chasing her. Subsequently, Sakina starts living in Tara’s house and the respect culminates into love.

Sakina and Tara get married and become parents of a baby boy. Their life seems like a bed of roses, till Sakina lays her hands on an old newspaper that has a photograph of her father (Amrish Puri), who she believes had been killed during the riots that took place during the partition.

The father is now...