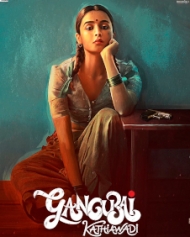 Gangubai Kathiawadi is a Bollywood drama movie, helmed by Sanjay Leela Bhansali. The movie star Alia Bhatt in the lead role. The movie has its screenplay by Hussain Zaidi. The movie depicts the story of Gangubai Kothewali, a young girl who has been sold into prostitution by her suitor Ramnik Lal, and how she becomes the madam of a brothel in Kamathipura.

With a thumri playing in the background, we see a pre pubescent girl being forcefully readied for her 'first night'. There's talcum powder smeared on her face, lipstick dabbed hurriedly and a piece of cloth pushed into her mouth to muffle her cries as a hand roughly pierces her nose with a nose pin. In spite of the speckle of blood around the ornament, it's her vacant eyes which catches your attention.

This is not an unlikely sight in the red-light areas of Mumbai's Kamathipura in the 60s. On the other hand, somewhere in Kathiawadi, a young spirited girl Ganga Harjeevandas Kathiawadi (Alia Bhatt), harbours dreams of becoming a Bollywood heroine. Under the pretext of helping her in achieving stardom, her boyfriend Ramnik coaxes her to elope with him to Mumbai. On reaching the city, the smooth-talking guy sells her off to a brothel for a sum of thousand rupees. Left with no other choice, Ganga turns a prostitute and embraces a new name 'Gangubai'.

A brutal encounter with a customer brings her face-to-face with one of the city's most revered mobster Rahim Lala (Ajay Devgn) who aids her in becoming 'Gangubai-Mafia Queen.' With her shrewd mind and underworld/political connections, Gangubai soon becomes a messiah for all the sex workers in Kamathipura.