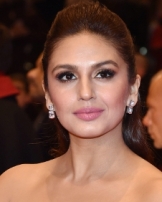 Huma Qureshi is an Indian actress and model. She has worked in theatre productions in Delhi and went on to act in television advertisements. She made her feature film debut in Anurag Kashyap's Gangs of Wasseypur (2012).

Her father is a restaurateur, and runs a chain of some 10 restaurants called Saleem's, all around Delhi.

Huma Qureshi has a background of professional theatre from Delhi, and having worked with theatre directors like Aamir Raza Husain, Sohaila Kapur, Rahul Pulkeshi and NK Sharma of Act One Group. She later moved to Mumbai and started to appear in television advertisements. She has shot for almost 15 adverts for brands like Vita Marie, Saffola Oil, Mederma Cream, Samsung Guru, Pears Soap and Nerolac.

Qureshi's work in television gained her considerable notice, particularly the advertisements that featured her alongside popular actors Shahrukh Khan and Aamir Khan. While shooting for the advert with latter, she recalls, noted Bollywood director Anurag Kashyap had told her that she would be acting in his next directorial. Kashyap, keeping his promise, signed her on for a supporting role in his crime thriller Gangs of Wasseypur.