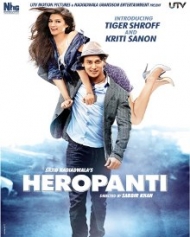 Action Romance
Release Date : 23 May 2014
Cast : Tiger Shroff, Kriti Sanon
Director : Sabir Khan
Synopsis
Heropanti movie is the remake of 2008 Telugu movie Parug. It is the story of these two young conflicting protagonists, their battles with society and their coming of age love story.

Story in detail:
Rising from the present India, an on-going era filled with conflicts between remarkable modernity and deep-rooted archaic traditions, an era where the fight between the big cities and small towns is at its peak comes a love story.

A love story sealed with an impossible fate, the story of the bold Bablu and the bratty Dimpy. Set against brutal clans and an increasingly violent landscape; will Bablu and Dimpy’s love blossom? Will their love have a chance?