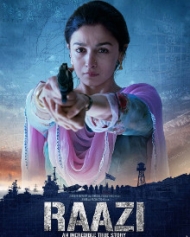 The movie is based on Harinder Sikka’s novel, Calling Sehmat. The movie is all about an Indian secret agent married to a Pakistani military officer during the Indo-Pakistani War of 1971.

Raazi is produced by Karan Johar and Vineet Jain under the banner Dharma Productions & Junglee Pictures. The movie has its screenplay by Bhavani Iyer & Meghna Gulzar. Raazi all set to hit the big screens on 11 May, 2018.