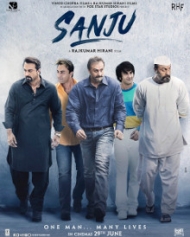 The film is based on the life of actor Sanjay Dutt, in which Ranbir Kapoor portrays Sanjay Dutt. The movie showcases various events from Sanjay Dutt's life - his younger days, the women in his life and his prison life.

The shoot of the film began on January 12, 2017 with Ranbir Kapoor and other lead stars.

The official trailer of Sanju was released on May 30, 2018 and which garnered over 20 Million views within its first 24 hours of release.

The music for Sanju is composed by A R...