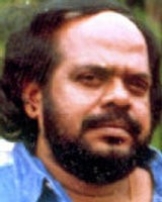 Bharathan (Malayalam: ഭരതന്) (November 14, 1947 – July 29, 1998) is widely regarded as one of the most prolific filmmakers of Malayalam cinema. At the time of his passing, at the age of 51, he had directed more than 40 movies in several languages. He was born at Engakkadu near Wadakkancherry, in Thrissur district of Kerala, India. Director, artist, sculptor, poster designer and art director, all rolled into one, Bharathans success graph reached its peak in 1982 when he won four Kerala State Film Awards. While his film Marmaram fetched him awards for the best film, best director and best art director, his film Ormakkayi was chosen by the jury as the second best film the same year.

Early Career
After completing his diploma from the School of Fine Arts he entered the world of Cinema as an art director for Vincent, an accomplished director of the time and the movie was Ghandarva Kshetram. He got the inspiration from his uncle, P. N. Menon — a veteran film director. After working as an art director and assistant director for a few movies, he made his directorial debut on 1974 with Prayanam, based on Padmarajan’s script. The movie received the national award for the best regional film in that year. It also marked the rise of two early proponents of middle-stream Malayalam cinema.

Film Career
Bharathan's films were experiments in which the director introduced new situations culled out of commonplace occurrences. The director showed a penchant for brilliantly portraying rustic and far-removed communities as in Vengalam, in which the life of brassware makers is depicted. His experiments also included Aaravam, more an art than a commercial venture, Kaattathe Kilikkoodu, a detective story, and Nidra, a film about the plight of a girl who is in love with a mentally deranged man.

Bharathan has directed over 50 films in Malayalam, Tamil, Telugu and Kannada. Starting his career in 1975 with Prayanam, Bharathan rode to fame with his off-beat Thakara, a film about a dumb-witted idiot who falls in love with a village beauty. Some of his other memorable films include Rathinirvedam, Chamaram, Paalangal, Amaram, Patheyam, Vaishali and Alolam.

In the very first movie, he displayed a rare talent in treating sex without falling into vulgarity which was to later became the trademarks of Bharathan touch. His association with Padmarajan was the beginning of golden era in malayalam cinema. Few more films came out from the duo partnership before Padmarajan became an independent director himself. Rathi Nirvedam and Thakara were the most noted among them with latter being considered one of his best.

Rathi Nirvedam was an exclusive treatment of teenage sexual fantasy. An adolescent boy falls in love with an elder girl next to door. In Thakara, he deals with life of a mentally retarded youth and his association with the society. The portrayal of the characters :Thakara and Chellapanashari are so real that, they never fade from the memory of cine lovers even after decades.

In the early eighties he made several romantic movies like Chaamaram, Marmaram, Paalangal, Ente Upasana and many more. They were not very remarkable, but did well in theaters and set the romantic trend. Other noted directors were also following the same suite. It was the romantic era of Malayalam cinema. But the creative genius of Bharathan was not going to be contended with mere following of trends. He was to go well beyond it and set a territory of his own - unattainable for other.

In Oru Minnaaminunginte Nurunguvettam, he is telling the story of a childless couple in their post retirement life. The audience are made to leave theatre with a heavy heart when the couple are eventually alone in their life again and vanishes on the screen in beautiful grass covered valley.

It is still a mystery in the realm of creativity when art excels the artist. In case of Bharathan it was Vaisali. It was the masterpiece from the craftsman -acclaimed as a classic painting on a wide canvas. Scripted by the well known writer M.T.Vasudevan Nair, it was an adaptation of a sub-story told in the epic Mahabharatha.

Another movie born from their association was Thazhvaram. The subject was revenge between two old partners, a theme quite uncharacteristic of Bharathan movies. Death hides in the shadow of each frame and the fear of inevitable creeps into the mind of viewers.

Language was not a barrier for this genius. When he directed Thevar Magan the tamil movie, casting stalwarts like Sivaji Ganesan and Kamal Hassan as a father-son duo, it was to become one of the finest movies in Tamil cinema. The movie was remade into many regional languages and bagged several national awards.

His creativity was not confined to film direction. He scripted screenplays, wrote lyrics and tuned songs for his films. To understand his accomplishment in music, one has to hear the mellifluous song from his Keli; “Thaaram Valkannadi Nokki…"

Later life
Bharatan died at a private hospital in Madras following prolonged illness. He was suffering from liver cirrhosis. He was a consummate artist and he died on 29 July 1998 at Madras.

Trivia
1. The person who is sitting and painting in the song "Ente Swapnathin" which was picturised on KJ Yesudas in the film "Achani" was Bharathan.

2. The drawings in the cave supposedly drawn by Rishyasrungan in Vaishali was undoubtedly drawn by Bharathan.