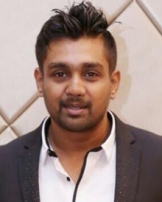 Dhruva Sarja is an Indian film actor working in the Kannada film industry. He made his acting debut in the 2012 released successful film, Addhuri which brought him much appreciation and popularity.

Dhruva debuted in films with the 2012 film, Addhuri. His portrayal of Arjun as the male lead opposite Radhika Pandit received praise from critics. He signed his next film Bahaddur in 2013, starring again opposite Pandit.

Personal life
Dhruva Sarja's brother Chiranjeevi Sarja, an actor in Kannada films, died on 7 June 2020. Their maternal uncle Arjun Sarja is a South Indian actor. Their grandfather Shakti Prasad was also an actor in Kannada films. Dhruva got engaged to his childhood friend Prerana on 9 December 2018. They married on 25 November 2019. Their daughter was born on 2 October 2022.