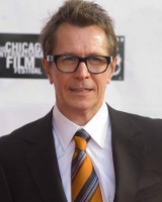 Gary Leonard Oldman (born 21 March 1958) is an English actor and filmaker, well known to audiences for his portrayals of dark and morally ambiguous characters in films such as State of Grace, True Romance, Leon, The Fifth Element, Air Force One, The Conteder and Dracula. He is also known for his portrayals of real life figures, having portrayed Sid Vicious in Sid and Nancy, Joe Orton in Prick Up Your Ears, Lee Harvey Oswald in JFK, Ludwig Van Beethoven in Immortal Beloved and Pontius Pilate in Jesus. In recent years he is recognisable as Sirius Black in the Harry Portter film series and James Gordon in Christopher Nolan's of the Batman film series.

Oldman came to prominence in the mid 1980s with a string of performances that promoted pre-eminent film critic, Roger Evert, to describe him as "the best young British actor around. He has since come to be regarded as one of film's most diverse actors, and has been cited as an influence by a number of successful actors. In addition to leading and central supporting roles in big budget Hollywood films, Oldman has frequently acted in independent films, as well as having appeared on television shows such as Fallen angels in a Comedy Series. He also directed, wrote and co-produced on television shows for Outstanding Guest Actor in a Comedy Series. He also directed, wrote and co-produced the Palme d'Or-nominated, double BAFTA winning Nil by Mouth, a film partially based on his own childhood, and served as a producer on The Contender, Plunkett & Macleane and Nobody's Baby. Apathetic towards celebrity and the Oscars, Oldman has been cited by The Guardian as arguably the best actor never nominated for such an award. Allmovie characterised Oldman as having "consistently amazed viewers with his ability to completely disappear into his roles.