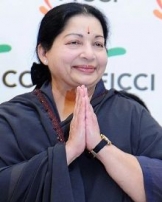 Jayalalithaa Jayaram also referred as J. Jayalalitha was a Chief Minister of the Government of Tamil Nadu, India. She is the incumbent general secretary of All India Anna Dravida Munnetra Kazhagam (AIADMK), a Dravidian party in the state. She is popularly called Amma (mother) and Puratchi Thalaivi (Revolutionary Leader) by her followers. She was a popular film star in Tamil cinema and Telugu cinema before her entry into politics.

She was born in Mysore as Komalavalli in a Tamil Iyengar family. After losing her father at the age of two, her family fell into poverty.  She was initially educated at the Bishop Cotton Girls High School in Bangalore  but later she moved to Madras State (now Tamil Nadu) along with her mother Sandhya, who ventured as an actress into Tamil cinema.  She was then schooled at Sacred Heart Matriculation School (popularly known as Church Park) of Presentation Convent in Chennai.

She excelled in academics and has claimed that she was offered a scholarship for higher studies from Government of India,  but with the guidance from her mother, young Jayalalitha moved into film industry.She started acting most of her well known hits when she was 15.

She had an elder brother named Jayakumar who died in the early 90's. He was married to Vijaya and has two children.

Jayalalithaa was admitted to hospital on September 22 with complaints of "fever and dehydration." She was later put ventilator and treated with antibiotics for infection and lung congestion.

Jayalalithaa was not recovered from her illness and died on 5th December 2016 at Appolo Hospital, Chennai. She remained as chief minister of Tamil Nadu till her death.

Prior to her venture into politics, she had a successful career in the Tamil film industry as an actress. She acted in the English language movie "Epistle" released in 1961 produced by Shankar Giri, son of former president of India Dr. V.V. Giri. Chinnada Gombe, her first film (in Kannada) was a major hit. Her first Telugu film Manushulu Mamathalu made her famous.

In 1972, she was honoured by the Tamil Nadu government with the award Kalaimamani. She has acted opposite Dharmendra in the Hindi Movie named Izzat. Her last film was Nadhiyai Thedi Vandha Kadal in 1980.

In 1981, she joined the AIADMK and was nominated to the Rajya Sabha in 1988, marking her entry into the Parliament of India. Her association with politics grew from her affair with M. G. Ramachandran (popularly known as MGR), movie star and then Chief Minister and her position as MGR's mistress helped her to become his political heir.

In effect, her appointment as Chief Minister was declared null and invalid. Therefore, technically, she was not the Chief Minister in the period between 14 May 2001 and 21 September 2001. O. Panneerselvam, a minister, was subsequently installed as the Chief Minister. However, his government was widely believed to have been puppeted and micro-managed by Jayalalithaa.

In 2011 state assembly election, she & her party won in many constitutency and formed the government in Tamil Nadu. She was re-elected as Chief Minister on 19 May 2016 and took the oath as Chief Minister for the sixth time on 23 May 2016.

Many people and the media feel that Jayalalitha believes in numerology and astrology; they point to her name change from "Jayalalitha" to "Jayalalithaa" as being directly borne out of such a belief. Press reports too have mentioned her faith in astrology and numerology, stating that she consults astrologers before taking important political decisions.