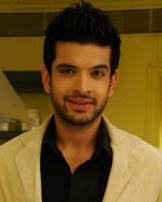 Karan Kundrra is an Indian actor, born into a business family. He is the youngest in the family with three older sisters. Kundrra did his schooling from Mayo College, Ajmer, Rajasthan and has graduated with an MBA degree which he acquired in the US. Karan said that Prince Hayer is his brother and Karan will give chance to showing his acting and music talent.

Being a model turned actor, as well as a businessman, Karan is the owner of an international call center. He runs a business of building infrastructural amenities for new buildings under construction, alongside his father. Their latest completed project is the 'Insignia Shopping Mall' in Jalandhar City (Punjab).

Karan made his acting debut with the lead role of Arjun Punj in Kitani Mohabbat Hai (NDTV Imagine) in 2008. In late 2009, he went on to play the lead character of Veeru in Bayttaab Dil Kee Tamanna Hai (Sony TV). After appearing in a cameo role as a ghost Prince in Aahat ( Sony TV), he went on to participating in dance reality show, Zara Nachke Dikha on Star Plus in May 2010.

Karan was seen playing the lead role of Arjun Singhania in the sequel of his debut show Kitani Mohabbat Hai Season 2 (Imagine TV). The show was back on public demand. He was then seen as a host in Gumrah – End Of Innocence (Channel V,Star Plus) followed by Gumrah – End Of Innocence season 2 (Channel V). He played the role of Karan Kapoor in Teri Meri Love Stories (Star Plus).He is currently seen in V The Serial (Channel V)

Karan is the tenth contestant who enters the Bigg Boss 15 house.