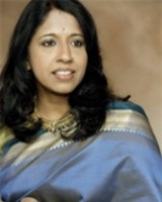 Kavita Krishnamurthy was born in the capital of India, New Delhi. Her father was an official working with the Education Ministry. She began her music training with her aunt, Mrs. Bhattacharya who taught her Rabindra Sangeet. As she completed her training, she began her formal training in Hindustani classical music under the aegis of Sri. Balram Puri. At the age of eight, she won her first gold medal at a music competition. Subsequently, she won gold medals as she participated in the Inter-Ministry Classical Competition in New Delhi in the mid 1960s.

At the young age of nine, she got an opportunity to record a Tagore song in Bengali with the legendary Lata Mangeshkar under the auspices of the music composer Hemant Kumar. Although the young Kavita was aspiring to be working with the Indian Foreign Services, Kavita moved to Bombay when she was 14 to try her luck as a playback singer in the Hindi film industry. After she completed her school education, she is an alumnus of the St. Xaviers' College, Bombay from where she acquired her Ph.D. in Economics. She was also very active in the St. Xaviers' Music Group in her college days. During the annual college festival (Malhar), she bumped into Ranu Mukherjee, the daughter of Hemant Kumar. Ranu took the initiative of reintroducing Kavita to her father. He was highly impressed by her skills, so he began her talent as a singer during his live performances. In one such performance, Manna Dey spotted her talent and employed her to sing advertisement jingles. Through her aunt's strong contacts, she met Mrs. Jaya Chakravarthy, the mother of actress Hema Malini who later took the initiative of introducing to Kavita to the music director Laxmikant (of the Laxmikant-Pyarelal fame) in late. 1976.

Laxmikant gave her an option to work as a dubbing artiste or a career in playback singing later. Kavita chose the former and impressed Laxmikant with her strong grounding in Indian classical music and her soulful timbre. Initially, she used to record songs and cut demos of songs intended for singers like Lata Mangeshkar and Asha Bhosle. In her struggle phase, Laxmikant-Pyarelal backed her so strongly that she was labelled as a "LP-campwalli" which gave many music directors an excuse to avoid working with her. She sang the song "Kaahe Ko Byaahi" in the film Maang Bharo Sajna in 1980 which featured in her own voice. Unfortunately, the song was dropped from the final cut.

In 1985, her career took off with her first major hit, "Tumse Milkar Na Jaane Kyon". Post the success of the song, it opened up various opportunities beyond the Laxmikant-Pyarelal camp. "Hawa Hawaii" and "Karte Hain Hum Pyaar Mr. India Se", two popular songs from the highly popular movie Mr. India (1987) proved a turning point for her. (The song was composed by music directors Laxmikant-Pyarelal and lip-synced on screen by actress Sridevi). The collaboration of Kavita and Laxmikant-Pyarelal produced many hits. Later, as she established herself and received patronage of composers such as R. D. Burman and Ismail Darbar. In 1994, Kavita's performance in the songs from music director R.D. Burman's last successful venture, 1942: A Love Story won her a lot of popular acclaim.

Personal life
Kavitha Krishnamurthy married Dr. L. Subramaniam in Bangalore on November 11 1999. Dr. L. Subramaniam is himself a world class violin player in the karnataki tradition and a brother of L. Shankar, who has played with a lot of famous stars, including Peter Gabriel and Shakti, the ground breaking group with guitar ace John McLaughlin. The surprise wedding took place in Bangalore in the presence of just 25 relatives. The world came to know it only on November 15 1999. Dr. L. Subramaniam has three children from his earlier marriage and she accepted them as her own children. Their daughter Seetha is a law graduate and is currently working on an English album. Narayanan, the middle one is a qualified doctor and loves music while Ambi, the youngest is a violinist. She says that they chose to live in Bangalore as her husband likes the city a lot and decided to make it his base. She would ideally prefer to work out of Bangalore but feels the need to be with her family.

Future Plans
Dr. L. Subramaniam and Mrs. Subramaniam are planning a music institute in Bangalore. It would be named after her late father-in-law Lakshminarayana, who was also her husband's guru. The idea is to make it a global institute. She says that the institute would teach both Indian and Western music. She wants her students to learn from the works of Mozart so that they can collaborate with western musicians who come to India. The dream has begun with violin classes. She says that she is not going to be involved in too many classes. Her role in the institute would be to supervise the teaching process and conduct workshops on how to interpret a song.

Her greatest wish is to create the best music library that India has ever had, including a vast variety of world music. Dr. L. Subramaniam has collected a lot of material to which they want teachers, students and enthusiasts to have access.