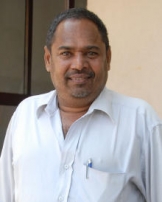 R. Narayana Murthy is a popular film director and producer of Telugu films or Tollywood. Masses call him people's star, red star or revolutionary star, but he has set a trend with his ‘red’ or communist revolutionary brand films that expose the exploitation done to the lower strata of the society.

He is inclined to expose the atrocities of the government and upper strata of the society against the helpless or poor. Having donated lakhs of rupees for the poor and needy whenever he made hit films, he leads a very simple life and often avoids media.

He was born in Mallampet village in Routulapudi mandal of the East Godavari district in a middle class farmer's family. In childhood, he used to watch films of top Tollywood actors like N.T. Rama Rao and Akkineni Nageswara Rao. That was the inspiration for his acting career.

He studied in Routulapudi till 5th standard and did his secondary education in Sankavaram. He developed social awareness there. He was attracted to revolutionary ideas during that time. He studied his Bachelor degree in Peddapuram. He was the president of students union in that college as well as the secretary of the Fine Arts department.

Dasari made him a full-fledged hero with a film titled 'Sangeeta'. It was produced by Hara Gopal on Purna pictures banner.

Turning Point In Career
Narayana Murthy, under his own banner of 'Sneha Chitra Pictures', started 'Ardharatri Swaatantryam' as his first venture in Rampachodavaram of Visakhapatnam district on June 10, 1984. It was released on 6 November 1986, on the eve of T. Krishna's death anniversary. T. Krishna did a role of a naxalite in that film. It was a big hit at the box office and had put up a communist brand over Narayana Murthy.

Narayana Murthy did not marry for the suspicion that his partner would oppose his path of action. He leads a very simple lifestyle and even does not own a car, unlike other producers who own many cars. He even eats with the common people as a common man in the local small hotels in Hyderabad. He is a real inspiration for his simplicity.