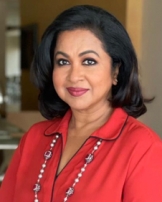 Radhika is a veteran Tamil actress, successful entrepreneur and producer. She is the founder of Radaan Mediaworks, which has produced many successful serials like Chithi, Selvi and Arasi. Raadhika is the daughter of the late Tamil actor and comedian, Mohan R. Radha. Her mother is a Sri Lankan. She has a younger sister named Nirosha (Niroja), who is also an actress and an older stepbrother named R. Radharavi.

She is married to actor Sarath Kumar, with whom she has a son named Rahul. Rahul was born in 2004. She was married twice prior to marrying actor Sarathkumar. Her first marriage to the Malayali actor-cum-director, Pratap K. Pothan, ended in divorce. As did her second marriage to Richard Hardy, who is a British national and by whom she has a daughter named Rayanne Hardy.

Rayanne Hardy
Rayanne got married to cricketer Abhimanyu Mithun in a traditional ceremony in Chennai on Aug 28th, 2016. Abhimanyu plays for Karnataka in first class cricket, and has also represented Royal Challengers Bangalore and Mumbai Indians in the IPL. He has also been selected for Team India in a few matches.

She was also rumoured to be having an affair with actor and politician Vijayakanth. Vijayakanth and Radhika acted together in many movies such as Poonthootha Kavalkaran, Naane Raja Naane Manthiri, Thertottakallan, etc. She is also a big friend to Tollywood Megastar Chiranjeevi and there was also a rumour that they both had an affair.

Sarathkumar also has two daughters from his first marriage, Varalakshmi and Pooja. Fellow actress-cum-writer-cum-director Suhasini Mani Ratnam is a close friend of Radhika, who has been with her during her hard times and lent a shoulder. Radhika and Suhasini hit it off during their first meeting for a film shoot and went on to become thick friends. Though Radhika was very good at acting, her make-up and hairstyles were much wanting.

Suhasini at her peak being a serious competitor for Radhika, has been Radhika's helping hand in redefining her looks and life. Suhasini in fact got an approval from Director Vasanth, of Keladi Kanmani, a come-back movie of Radhika, to be with Radhika on her sets and be her hairdresser and make-up artist. People still admire their friendship though both of them have gone ahead in different work paths after their peak stardom. Some of her other good friends in the film fraternity are Saritha and Sri Priya.

Raadhika Sarathkumar has acted in Tamil, Telugu, Hindi as well as Malayalam films.

After becoming successful in cinema, Radhika wanted to do something different and decided to take on the small screen, a venture that everyone thought was a mistake she would regret. But determined to pursue something she believed in, namely producing her own TV software under the Radaan TV banner, she started the same in 1994.

After some initial hiccups, the company re-emerged successfully as Radaan Mediaworks (I) Ltd in 1999, and by 2008, had an annual turnover exceeding Rs. 10 crore. In 2004, the company ventured into film production in Tamil, Telugu and Hindi markets. Radaan has plans to enter into Hindi television market.

She has acted as the title character in several hit megaserials produced by her company, Radaan Mediaworks. Her first hit drama was "Chitti", a 488-episode serial in which she portrayed the main character, Saradha. The serial was widely watched and praised throughout the Tamil-speaking world. Fresh off the success of "Chitthi", Radhika went on to produce another, longer Tamil serial, the 757-episode "Annamalai", in which she once again played the major role.

Her co-star in both these first two serials was the veteran actor Sivakumar, with whom she was often paired in films as well. However in "Annamalai", he played her eldest brother.