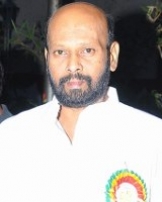 Rami Reddy is a famous villain in Telugu Film Indutry, Who has acted several films in all South Indian Launguages and Hindi. Rami Reddy earlier played negative roles, comedy roles and character artist after getting success through Ankusam movie. He is so famous for his dialogue 'spot pedatha' in Ankusam movie with typical Telangana slang.

Rami Reddy was born near Chittoor district and He did his BCJ (journalism) in Osmania University Andhra Pradesh.

Rami Reddy worked earlier to Munsif Daily new paper as Journalist before entering into movies, he acted in some hit movies like Osai Ramulamma, Ammoru, Gaayam, Anaganaga Oka Roju, Peddarikam, etc. He had been suffering from cancer. He died on 14 April 2011 at 11:30 AM in Hyderabad Hospital.