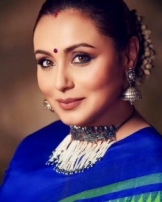 Rani Mukherjee is an Indian film actress who works in Bollywood movies. Making her acting debut with Raja Ki Aayegi Baraat (1997), Mukerji had her first commercial success with Karan Johar's romantic movie, Kuch Kuch Hota Hai (1998), her biggest hit so far, and won the Filmfare Best Supporting Actress Award for her performance in the film.

Mukerji comes from a film-oriented family of Bengali origin. Her father Ram Mukherjee was a director and one of the founders of Filmalaya Studios, while her mother Krishna was a playback singer. Her brother Raja Mukherjee is a film producer, now turned director.  Mukherjee is a trained Odissi dancer and began learning dance in the tenth grade. She  studied at Maneckji Cooper High School in Juhu, and later enrolled at Mithibai College in Mumbai.

Mukerji as Tina Malhotra in Kuch Kuch Hota Hai (1998) is her biggest commercial success to date. Mukherjee had a successful comeback in 1998 with Ghulam, opposite Aamir Khan; the film did well at the box office. The song Aati Kya Khandala made Mukerji popular among the masses, earning her the nickname of Khandala Girl. Karan Johar's directorial debut, Kuch Kuch Hota Hai, co-starring Shahrukh Khan and Kajol, was her next release that year. The movie was a blockbuster, and she received her first Filmfare Award in the Best Supporting Actress category.

She re-invented her image with the commercially and critically successful Saathiya (2002), for which she received numerous awards and nominations.

In 2003, she appeared in the film Chalte Chalte alongside Shah Rukh Khan. The movie was successful at the box office and was also the fourth highest-grossing movie in the world that year. For her stupendous performances in films such as 'Black and Yuva, Mukherji received acclaim from audiences and critics alike.

Later, she starred in movies such as Talaash and Mardaani. Her next film was Kabhi Alvida Naa Kehna. Released in 2006, the film was a commercial hit and the actress received various nominations and awards for her performances.

After that, she worked with director Raj Kumar Gupta for the film No One Killed Jessica. Her stellar performance in the movie won her the Filmfare Award for Best Supporting Actress in the year 2011. Her other notable performances include Hichki and Mardaani 2.