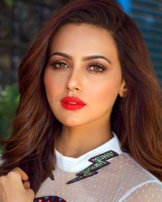 Sana Khan is an Indian film actress and model. She is perhaps best known for her appearances in ad films, her item numbers in Indian films and for her performance as Janu in the 2008 Tamil film Silambattam.

Sana Khan, whose father is a Malayali Muslim from Kannur and mother Saeeda from Mumbai, worked as model at her birth place Mumbai, appearing in more than 30 ad films alongside the likes of Shahrukh Khan and Akshay Kumar. She later on, appeared in item numbers in films such as E, Bombay to Goa and Dhan Dhana Dhan Goal, before she was signed in 2008 do to the lead female role in the Tamil film Silambattam opposite Silambarasan, who approached and offered her the role.

Playing a talkative, tomboyish Brahmin village girl in the film, she won rave reviews for her performance as Jaanu and the ITFA Best New Actress Award in Singapore.

Subsequently, she was signed to do two more Tamil films, Thambikku Indha Ooru with Bharath and Aayiram Vilakku with Shanthnoo Bhagyaraj.