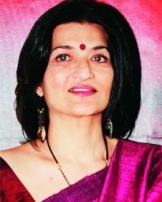 Sarika is an acclaimed National Award winning Indian actress. She started her film career as a child actress (baby Sooraj) as a boy in the 60's in Hindi movies. She appeared in many children's movies as well as B grade movies . She moved to better films with Rajshri Productions' Geet Gaata Chal with Sachin, with whom she starred in many films and is known to have a brief affair as well.

In her acting career, she was often cast as the vamp for example in the film Vidhaata or a 'westernized' girl in films from the 1980's. She gave up her career after her marriage with Kamal Hassan during the peak of her career. She then made a comeback in Hindi films after her divorce with Kamal Hassan. She played Ipsita Ray Chakraverti in the film Sacred Evil which failed at the box office.

She also starred as Sheetal Thadani in the movie Bheja Fry (2007). She also had a small but important role in Manorama Six Feet Under.

After her break off with Sachin, she was involved with an actor/model Deepak Parasher. Later, she married renowned Tamil/Hindi film actor Kamal Hassan. They have two daughters Akshara Haasan and Shruti Haasan. Her daughter Shruti Haasan made her debut in movies as a playback singer, for a Tamil movie called Kathiruppen.