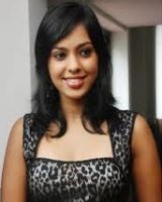 Shammu (Sheerin Sharmilee) is an Indian film actress and model. She has appeared in Tamil films, a such as Kanchivaram, Mayilu and Dasavathaaram.

Background
Shammu was born in 1992 as Sheerin Sharmilee, but eventually became acknowledged as Shammu. Despite starting a film career, Shammu is continuing her 11th standard courses through online classes. Previously, she had been studying at the Cyprus Creek Senior High School in Orlando, Florida. Shammu has been living with her family in the USA for the past 12 years.

Her family derives from Neyveli in Tamil Nadu and she speaks Tamil at home. Her father has his own computer consultant office in the USA, whilst her mother is a housewife. Her younger sister, who is nine, has apppeared in Mayilu, as the younger version of Shammu's character.

Career
Shammu appeared in Dasavathaaram after receiving a call from the crew for the film, whilst they were searching for an Indian actress to play a short role. They had come to know of her following her Bharathanatyam performances, which were well acclaimed in the area. Her role was, that of a sicentist, who panicked after seeing the bio weapon being exposed for the first time.

Soon afterwards, whilst on holiday in India, Shammu attended an audition for Prakash Raj's home prodcution Mayilu, and when she succeeded, Prakash Raj also suggetsed her name for anothe rproject that he was working in. She appeared in Kanchivaram, directed by Priyadarshan as Prakash Raj's daughter and was critically praised for her performance.

In Mayilu she plays a village girl and had to sport dark makeup, oily braid and dirty clothes, to resemebble a typical girl from Madurai. In Malayan, she plays the role of a bubbly girl from Madurai with a different shade alongside actor, Karan.