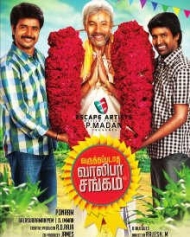 Varutha Padatha Valibar sangam is an tamil comedy movie directon by Ponram Assistant director of M Rajesh’s assistant, which stars Siva Karthikeyan in the lead role, will be a comedy film. This film is produced by P Madhan under his banner Escape Artistes Motion Pictures. "OKOK" fame director M Rajesh wrote the dialogues for the film.
Siva Karthikeyan debuted as a singer too in this movie. On July 13th a Making of song recording video of the song sung by Sivakarthikeyan was released and next day a theatrical film trailer was released, by Sony Music India on their YouTube channel.
Song making video got 1 million views in 48 hours and 2 million views within 5 Days on YouTube after its release. It has got more than 3.8 million hits in 4 weeks.
Google has removed the 3.8 Million hits 'varuthapadatha valibar sangam' making video citing content violations. It is quite obvious some one has played his dirty politics to remove the song. However, it is going to backfire on whoever did this. The film scheduled to release on 6 September 2013.
Movie goes for Censor before 15 days of release and got "U" certificate.
Story
Varutha Padatha Valibar Sangam, is a story of careless youths, who are always involved in tug of war with the senior citizens of the village. The youth team is headed by Bose (Sivakarthikeyan) and elders group by Sivanandi (Sathyaraj); both these teams always clash. During these conflicts, Bose falls in love with Lathapandi (Sridivya).
How he convinces her will take the movie to a different track. Varutha Padatha Valibar Sangam is a full fledged comedy and family entertainer. Actor Sivakarthikeyan, Sathyaraj and comedian Parota Soori are the main highlight of the movie.
The conflits between the two teams are shown in a comical way and seems quite interesting. The ending is the major bonus of the movie as the fun quotient is increased altogether. But, the story could have been better if it was cut short.