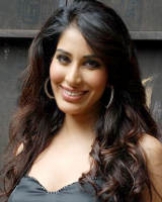 Sophie Choudry is an Indian singer and a popular MTV VJ.

Sophie is a linguist, and speaks English, Hindi, Urdu and French. She sings in these languages as well as in Spanish, Punjabi and Arabic.

Sophie was born in UK. Her father adored Sophia Loren and hence her birthname is "Sophia"; however, she now goes by the name "Sophie".

She was a performer from a young age: a part of the school choir and playing the lead role in school and college musicals. Her talent was discovered by the acclaimed music director Biddu when she was 13 years old. She started her career by singing back up for Shweta Shetty and Alisha Chinai.

Having completed her education, Sophie decided it was time to follow her dreams and she began her singing career. She moved to Mumbai in 2003, became an MTV VJ and a successful singer. She is trained in classical Indian dance, Bharatnatyam and Kathak and street dance.

Sophie has also compered various award shows such as Star Screen Awards and several corporate events for Airtel, Tata, Godrej and many others.

She hosted MTV Loveline. She made her debut in 2000 with her all-girl band "Sansara" with a song which Sophie herself wrote ("Yeh Dil Sun Raha Hai"). Her videos "Habibi" and "Le Le Mera Dil" were popular. She has performed in many Indian cities, as well as in Montreal and London's Wembley Arena.

In November 2003, she released her first super-hit remix album "Sophie & Dr. Love", Mera Babu Chail Chabila. The album was a chart-topper for six months in India and broke records in the U.K Asian Pop Charts by holding the number 1 spot for 12 weeks. The album contained old classics by Runa Laila, Nazia Hassan and Salma Agha. The video was directed by Rao and Sapru of Kaanta Laga fame and the music was remixed by Harry Anand.

Less than one year on, Sophie returned with her newest offering "Babylove"; Ek Pardesi Mera Dil Legaya. According to Sophie, she listened to over 400 songs in order to come up with her perfect 12. Songs on this album include Dil Ke Armaan, Ghar aaya Mera Pardesi, Bachke Rehna re baba, Zoobi Zoobi, Naulakha, and Jaadugar Saiyyan.

The Ek pardesi video showed Sophie as glamorous and endearing. This was followed up by videos of Jaadugar Saiyyan and nine other short videos from the album including the songs Naulakha, Dil ke Arman, the hip hop Kissiko, Saiyyan le Gayi Jiya, and many more.

She made her Hindi film debut in David Dhawan's film "Shaadi No.1" in which she was paired opposite Zayed Khan. The film also starred Fardeen Khan, Sanjay Dutt, Esha Deol and others. The film was released on 4th November, and had a great response.