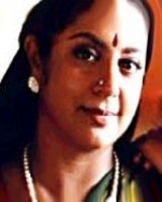 Srividya was a leading South Indian film actress of the 1970s, 1980s, 1990s and early 2000s, in addition to being a good singer. In the latter part of her career, she concentrated on Malayalam films. Her brilliant portrayals as a mother in many films were highly acclaimed. Srividya's personal life was full of tragedies. She fought against all odds with dedication in her work, until she died of breast cancer.

Srividya was born on 24 July, 1953, at Chennai, Tamil Nadu, India, to a Tamil film comedian Krishnamurthy and Carnatic classical singer M. L. Vasanthakumari. She had a brother, Sankararaman. Her father had to stop acting in the year she was born because of a disease which affected his facial muscles.

Her family fell into financial crisis. Her mother worked long hours to meet the family's financial needs. Srividya once reportedly said that her mother didn't even have time to breastfeed her. Srividya debuted in acting at a very early age. When her parent's marriage faced problems due to financial difficulties, Srividya's youth was blighted.

She got a marriage proposal from a scientist based in the U.S., but the marriage did not materialize due to financial problems faced by her family.

Srividya launched her career in Malayalam films with a dance scene in Kumarasambhavam, directed by P. Subramanyan. She played a heroine in the film Chattambikkavala opposite Sathyan. She gained public attention in Chenda, directed by A. Vincent.

In mid-1970s, she became busy in the Tamil film industry. She acted in films such as Sollathan Ninakkiren and Apoorva Raagangal, both directed by K. Balachander. The film Apoorva Raagangal (1975), in which she acted opposite the then-rising stars and now superstars of Tamil films, Rajinikanth and Kamal Haasan, virtually changed her life.

In the film, she acted as the wife of Rajinikanth and as the lover of Kamal Haasan. She fell in love with Kamal Haasan during the making of the film. They had the support of their families, but they broke up. Later, she fell in love with George Thomas, an assistant director in her Malayalam film Teekkanal. She married him on January 9 1978, despite opposition from her family.

As George wished, she was baptised before the marriage. She wanted to stay as a housewife, but had to return to acting, when George forced her to, citing financial issues. She soon realised that she made a wrong decision of marrying him. Her family life became miserable and the marriage ended in a divorce.

It was followed by a prolonged legal battle to settle financial issues between the two. The case went up to the Supreme Court of India, where she won the final decision. After the divorce, she left Chennai and settled in Trivandrum.

Srividya was a good singer as well. She first sang for films in the Malayalam film Ayalathe Sundari. She later sang in several films, such as Oru Painkilikkadha and Nakshathra Tharattu. She was an expert classical vocalist as well. She used to sing in functions such as the Soorya Festival.

Srividya's later career was marked with her signature mother roles, the most notable of which was probably in Thalapathi (1991), directed by Manirathnam, in which she acted as the mother of Rajinikanth, who acted as her husband in Apoorva Raagangal (1975).

In October 31, 1990, Srividya's mother M. L. Vasanthakumari died, which devastated her. She later began acting in Malayalam and Tamil TV serials. She was a part of super-hit Malayalam serials like Swapnam.

In 2003, she underwent a biopsy test following physical problems and was tested positive for breast cancer. She underwent treatment for three years. In October 2006, she underwent chemotherapy, but the cancer had already spread throughout her body. On 19 October, 2006, at 7:55 PM she breathed her last.