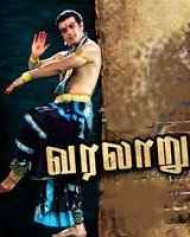 U | Action Drama
Release Date : 20 Oct 2006
Cast : Ajith Kumar, Asin Thottumkal
Director : K.S. Ravikumar
Synopsis
Varalaru movie takes off with Shivashankar (Ajith) who is a millionaire father of two sons. He is confined to wheelchair due to an accident, in which his wife (Kanika) had died.

He dotes on his son, Vishnu (Ajith, who is suave and urbane and leads a carefree life. Vishnu goes to Thottapuram, and he meets Divya (Asin) who is a college student and instantly falls in love with her.

The narration reveals that Jeeva (Ajith) , the son who Shivashankar distanced with, has impersonated like Vishnu to revenge his father. The rest of the film is all about why Jeeva has the vindictive feels over his father.