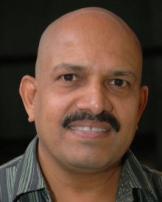 V. Manohar is a music director, lyricist and an actor in Kannada film industry. He has scored music to several Kannada movies. He is a native of Vitla village in Dakshina Kannada district of Karnataka. During the beginning of his career, he was very closely associated with the popular Kannada cinema directors Kashinath and Upendra.

He has won Karnataka State Award for best music for the movie (Super Hit) Anuraaga Sangama.