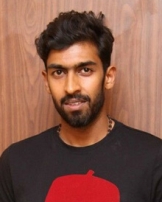 Vinay Rajkumar is an Indian film actor, known for his works primarily in Kannada cinema. He is making his debut with Prakash's upcoming film Siddhartha opposite Apoorva Arora.

Vinay was born on 7 May 1989 to actor and producer Raghavendra Rajkumar and Mangala Raghavendra. He has a brother, Guru Rajkumar. He is a grandson of actor and singer Dr.Rajkumar.

Vinay has been preparing himself for the launch from the past 2 years with all the required trainings. He has undergone vigorous dance training under Dhanu of Imran Sardariya fame and fight and martial arts lessons under the guidance of Appu Venkatesh and Ravi Varma master.

Vinay has also attended many acting workshops. Vinay worked with director Soori during the making Anna Bond in which his uncle Puneeth Rajkumar had acted.