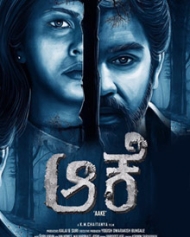 Chiranjeevi Sarja and Sharmila Mandre are playing the main lead roles in this movie.

Arjun (Chiranjeevi Sarja) works for a print media and is assigned a horror series. While working on it, one particular episode involving an old mental institution inside the forest fascinates him and his friend.

Since the episode they are working on is based on a book which claims that the story of a certain Maaya Matthews is true, Arjun and his friend went deep into the story, hoping that the subject they are handling is nothing more than a mere fiction. On the other hand, Sharmiela Mandre's life is narrated.

She is an actress and a single mother with serious financial crunch. How is her life connected with the character named Maaya forms the crux of this fascinating story.