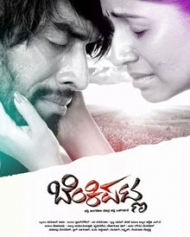 Popular Kannada anchor Anushree will be making her debut as an actress to Sandalwood through Benki Potna. where she will be seen as typical village girl in the movie.