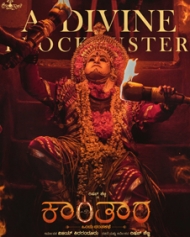 Kantara is an adventure drama thriller movie written and directed by Rishab Shetty. The movie casts Rishab Shetty and Sapthami Gowda in the main lead roles along with Kishore, Achuth Kumar, Pramod Shetty, Vinay Biddappa, and many others seen in supporting roles. The music was composed by B Ajaneesh Loknath while the cinematography was done by Arvind S Kashyap and it is edited by Pratheek Shetty, K M Prakash. The film is produced by Vijay Kiragandur under Hombale Films banner.
Story
Kantara is a vast, mysterious forest, In Kantara, the forest plays a significant role. People in the town live as children of the forest, blending with it on one side. However, the Forest Officer has decided to protect the forest diligently. This is so that not a single piece of wood will be removed from it and no one will encroach upon it. Also included are the misdeeds of Devendra (Achyut), a lusty politician.
Shiva (Rishabh) always fights for the village, and Muralidhar (Kishore), who says that the law applies to everyone, is not one to stand up to anyone. A key theme of Kantara is the encroachment of forest land, looting of forest wealth, and conflict between forest officials and villagers.
Release Date
Kantara movie was released in theaters on September 30, 2022.