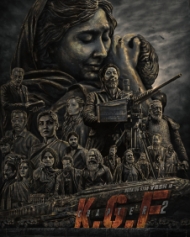 KGF Chapter 2 aka KGF 2 movie is a sequel to the blockbuster movie KGF and it is a period action film written and directed by Prashanth Neel. The movie casts Yash and Srinidhi Shetty are in the lead roles along with Achyuth Kumar, Malavika Avinash, Anant Nag, Vasishta N. Simha, Ayyappa P. Sharma, B Suresh, and many others are seen in supporting roles. The music was composed by Ravi Basrur while cinematography is done by Bhuvan Gowda and is edited by Ujwal Kulkarni. The film is produced by Vijay Kiragandur under the Hombale Films banner.

KGF 2 starts exactly where its prequel ends, however, there is a twist in the sequel, Anant Nag is replaced by Prakash Raj. Though both actors are incredible performers, the replacement, or at least the split second of confusion surely felt like faint discontinuation. Well, coming to the film, Rocky (Yash) takes over KGF (Kolar Gold Fields) and creates his humongous empire, but fate has other plans as Garuda's brother Adheera (Sanjay Dutt) comes into the scene, evidently with a bigger plan. The circumstances force Rocky to leave KGF, and how he manages to face the deadly Adheera, the then Prime Minister of India Ramika Sen (Raveena Tandon), and his girlfriend Reena (Srinidhi Shetty) amid the war-like state forms the crux of the story.

The movie's first look poster was released on 21 December 2019. The film teaser is expected to release on January 8, 2020, on the Occasion of Yash's Birthday due to the busy shooting schedule makers did not release any teaser just released a second look poster of Rocky Bhai. The makers unveiled the teaser on 7 January, ahead of the official launch. Instead of releasing the teaser in five languages, the makers released it as a single teaser featuring English dialogues. It became the most viewed and most liked teaser. The official trailer of the film was released on 27 March 2022 and became the highest ever viewed Indian trailer in 24 hours with 109 Million.