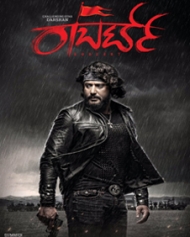 Roberrt is a action entertainer movie directed by Tharun Kishore Sudhir. The movie casts Darshan, Vinnod Prabhakar, Asha Bhat, Aishwarya Prasad and Sonal Monteiro are in the lead roles along with Jagapathi Babu, Chikkanna, Tejaswini Prakash, Jason DSouza, Ravi Kishan and many others are seen in supporting roles. The Music composed by Arjun Janya and background music done by V Harikrishna while cinematography done by Sudhakar S Raj and it is edited by K M Prakash. The film is produced by Umapathy Srinivas Gowda under Umapathy Films banner.
Story
Raghava (Darshan) is a Ordinary Cook and trying to live up to the cute son and teach him nonviolence. But he has a dark background. There is a solid reason why he is living a virtuous life now. That is the reason. What is his darkest background? Whose baby is that? You have to watch the cinema to know everything.
Release Date
Roberrt releasing in Kannada and Telugu simultaneously on March 11, 2021.
Roberrt Box Office Colletections
On first Day Roberrt collected 17.24 crores, second Day it collected 12.78 crores, third day it collected 14.10 crores and fourth day 15.68 crores and in total first week it collected 78.36 crores and it is record in Sandalwood.