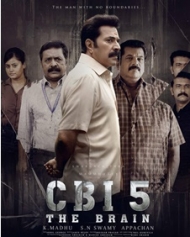 CBI 5: The Brain is 2022 Malayalam  mystery thriller movie, directed by K. Madhu. The movie stars Mammootty as Sethurama Iyer, Mukesh as Chacko, Jagathy Sreekumar as Vikram and Saikumar as DySP Sathyadas. The movie has its soundtrack and score composed by Jakes Bejoy. CBI 5 The Brain revolves around a murder investigation that is somewhere connected with the assassinations of the Gandhi family members.
CBI 5: The Brain is the fifth installment from CBI film series.
CBI officer Balagopal (Renji Panicker) narrates the story of one of the most difficult murder investigations of his career, in an interactive session with a batch of IPS freshers. The series of murders, which was named 'basket killings' was investigated by the CBI team headed by Sethurama Iyer (Mammootty). How Iyer and his team solved the case and unmasked the truth forms the crux of CBI 5 The Brain.