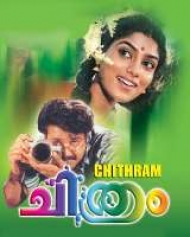 U | Drama
Release Date : Dec 1988
Cast : Mohanlal, Renjini
Director : Priyadarshan
Synopsis
Kalyani (Renjini) who is the daughter of a wealthy NRI Ramendra Menon (Poornam Vishwanathan) who resides in the US. Kalyani, brought up in Kerala by her father's friend Kaimal (Nedumudi Venu), falls in love with another man (Shanawas) and decides to marry against the wishes of her father. When her boyfriend finds out that she will be disinherited, he ditches her at the altar.

After a short while her father decides to retract his disapproval and spend a fortnight's vacation with his daughter and son-in-law in his estate near a tribal community where Menon is the chief. Because her father is already ill and because this may be his last vacation, Kalyani and Kaimal want to make it as happy for him as possible. They decide to conceal the fact that her boyfriend dumped her.
Cast
Crew
Priyadarshan
Director
Appachan
Producer
Ilayaraja
Music Director
Kannur Rajan
Music Director
News
User Review
WRITE YOUR REVIEW
Show All
Chithram Comments
In Theaters Now
Upcoming Movies
Malayalam Movies Box Office Collection Updates