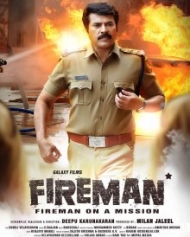 The fire extinguishing procedures are under the leadership of Commissioner Sherin Thomas IPS (Nyla Usha). This is for the first time Nyla plays a cop role. Fireman will be her third movie starring opposite Mammootty, Youth Icon Unni Mukundan does a major role along with Mammootty.

Movie planned to start its shoot by the third of October at Ernakulam, but started rolling on October 20, 2014 at Palakkad. A first look poster of fireman released on November 26 followed by a second one on 29 November through Mammootty's official Facebook page. Fireman is produced by Milan Jaleel under the banner of Galaxy Films. The original songs and musical score are composed by Rahul Raj.

Fireman is slated to hit big screen on Feb 19th.