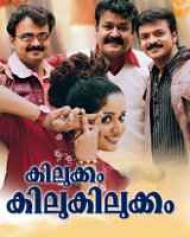 Kilukkam Kilukilukkam movie is a sequel of Kilukkam. Chandini (Kavya Madhavan) sees her father Krishnadas (Vijayaraghavan), Mayor of Cochin being killed by the rivals, but manages to escape from them and comes to Ooty. The needle of suspicion falls on Royichan (Kunjakko Bobban) and friend Appachan (Salim Kumar). So they shift to Ooty to escaper from Ooty. Besides Roy and Appa, Nischal captivated by the beauty of Chandini and try to impress her.

Meanwhile Chandini goes missing. Rest of the story is how Jogi comes from foreign and teams up with other to trace and save Chandini.