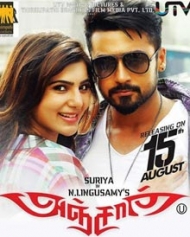 Anjaan (English: Fearless) is an upcoming Tamil gangster film being directed by N. Lingusamy, and produced under his own banner Thirupathi Brothers. The film stars Suriya in a dual role, with Samantha Ruth Prabhu as the female lead.
Cinematography and editing are handled by Santosh Sivan and Anthony, respectively, while Yuvan Shankar Raja has composed the music. Anjaan is slated for release on August 15, 2014. Movie Title Logo Revealed on April 30th, 2014.
Story

Divided by bodies, united by friendship could be the best words to describe the friendship of Raju Bhai (Surya) and Chandru (Vidyut Jamwal). The movie begins with Krishnan (Surya), who claims to be the brother of Raju, searching his missing brother in Mumbai.
He comes across those people, who were connected with his sibling in one or the other way. He tries to know the whereabouts of the missing man even from the Raju's enemies. This part builds a kind of curiosity and people wait with bated breathe to know about Raju Bhai.
A flashback tells about the friendship that was shared between Chandru and Raju. As they started getting popular in the underworld, the list of enemies too grows. A new police commissioner decides to clean the city and kills a few men from their gang for which Raju Bhai retaliates by kidnapping his daughter (Samantha) and subsequently they fall in love.
This affair diverts the attention of Surya from his profession and the close friends have a small miscommunication!
At this juncture, they get into a trouble with a bigger criminal (Manoj Bajpai) than them. The first half ends with the death of Chandru. Who killed Chandru? Who is Krishnan? What happened to Raju and Jeeva's love? Watch the movie to get the answers for these questions.
Suriya's Look
Suriya was said to possess two different appearances for filming, starting with a raw and jagged look. Manoj Bajpai was reported to be playing the film's antagonist while Vidyut Jamwal would also appear in a prominent role.
Comedian Vivek was approached to play a role in the film, but could not take up the offer as a result of date clashes with Vai Raja Vai. Instead in March 2014, another comedian Soori was signed.
Actor Turns Singer
Yuvan Shankar Raja composes the soundtrack and score of Anjaan, which marks his fourth collaboration with director Lingusamy. The soundtrack album would have five songs.
Suriya will be singing a song for this movie. It is worth mentioning that Suriya has already crooned for ‘Nescafe’ advertisement. It looks like Lingusamy wants Suriya to lend his voice for a song and Suriya might grab this opportunity to showcase his new skill.
The song begins with the line Ek Do Teen Chaar and it was already shot on Surya and Samantha in Panchgani, Maharashtra. The romantic number was canned with a dummy voice earlier.
Now, Surya's voice will replace the dummy track.
Special Camera
Vijay Milton was first roped in by Lingusamy as the cinematographer for the film, but in October 2013 he was replaced with Santosh Sivan, who worked for the first time with Lingusamy.
In mid-October, a test shoot occurred with Suriya and Malavika Rampradeep, a Bharatanatyam dancer, with the Red Dragon Digital camera along with a high zoom lens. It was reported that it was the first film in the world to be shot with the camera. The technology had not even been used in Hollywood films, according to the makers.
Productions
Suriya reportedly waited for six months after the release of Singam 2, but failed to receive a complete script from Gautham Menon and no progress took place in this period of time. Owing to this reason, he opted out of Gautham's film in October 2013 and announced that he would soon start work on Lingusamy's film.
The director confirmed the news and also stated the film would officially start filming from mid-November 2013. It was said that the script had been modified a few times. The film was started without a title. In January 2014, the title was officially announced to be Anjaan.