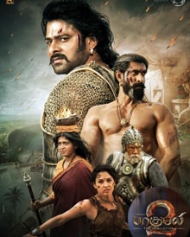 Baahubali 2 The Conclusion (Bahubali 2) is a two-part Indian epic movie simultaneously made in Telugu and Tamil languages direction by S S Rajamouli. It is the continuation of Baahubali: The Beginning. (Full Cast & Crew)
Story In Detail
As Baahubali-the beginning ends with the betrayal of Kattappa to Amarendra Baahubali, it is now being predicted that Sivagami orders Kattappa to Kill Baahubali since he married Devasena without her consent.
Trouble starts once Queen Mother Sivagami appoints Amrendra Bahubali as the future king. After Baahubali's love and marriage with Devasena, differences between Baahubali and Sivagami creates space for Bhallaladeva and how he betrays Baahubali and Sivagami to acquire the throne is the rest of the story which is to be followed by revenge of Shivudu and Devasena on Bhalladeva.
View: Interesting Photos From Baahubali 2
Read: Baahubali 2 Live Audience Update
Productions
Both parts were jointly produced on a budget of ₹250 crore (US$37 million). Baahubali features Prabhas, Rana Daggubati, Anushka Shetty and Tamannaah in the lead roles. The movie is simultaneously dubbed into English, Hindi, Malayalam and in several foreign languages.
The film series is touted to be the most expensive in India till date. The screen writer, K. V. Vijayendra Prasad who wrote stories for most of Rajamouli's films once again penned the story for Baahubali. R.C.Kamalakannan is chosen as visual effects supervisor and Kotagiri Venkateswara Rao is the Editor.