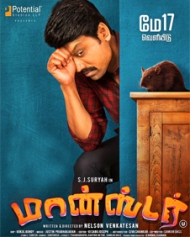 Monster is a Tamil fantasy comedy movie, directed by Nelson Venkatesan. The cast of Monster includes S.J. Surya, Priya Bhavani Shankar and Karunakaran.
Story
Three different characters run parallel who get affected or rather encounter one character at a certain point. Anjanam Pillai is a government servant who is well settled, leads a simple but contented life. On a different track, Karunakaran is the most charming person in his office due to his witty talks and sense of humor. Mekala (Priya Bhavani Shankar) is a sensible and thoughtful person who proceeds with her life.
All these three characters meet up with the "Monster" which is a rat. The said monster acts as both the hero and villain to the three characters based on the situation and person. What happens to these folks and what is the actual proceeding all about is the whole movie.