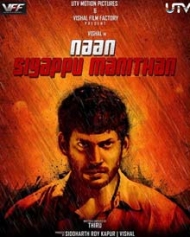 Naan Sigappu Manithan is an tamil action - thriller movie direction by Thiru. The movie starring with vaishal and Lakshmi Menon. The movie is been produced jointly by UTV Movies and Vishal Film Factory.
Though the title of the film is borrowed from a 1985 Super Hit film starring superstar Rajinikanth, it is a new subject untold in Tamil cinema and we look forward to the release of the film.
Story
Naan Sigappu Manithan talks about narcolepsy, a neurological sleep disorder and the story begins in style as Vishal is introduced as a man who wants to fulfil 10 specific desires in life.
Vishal fulfill his all desires one by one except one and unfortunate incident takes place in his life, then it makes him into trouble. And he suffer a lot from narcolepsy, What happens from there-on to be watched on big screen.
Cast & Crew | Review | Fans Review | Fan Photos
Director said "Vishal Krishna had to work very hard to play the guy suffering from the problem because there was no reference point to get the body language right".
"It's a concept that hasn't been used in films so far. Playing a character with such disorder was not easy and Vishal worked extremely hard for it. I feel it's his most challenging role because for Vishal's character we didn't have any reference".
Click Here to Watch Video Songs of NSM