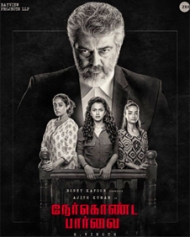 Thala Ajith’s upcoming movie, Nerkonda Paarvai aka Ner Konda Paarvai, produced by Boney Kapoor and directed by Theeran Adhigaram Ondru fame, H Vinoth. Nerkonda Paarvai is a remake of Bollywood movie Pink stars Amitabh Bachchan and Taapsee Pannu in lead roles. Nerkonda Paarvai movie cast includes Shraddha Srinath, Vidya Balan, Abhirami Venkatachalam, Andrea Tariang and journalist Rangaraj Pandey. The music director Yuvan Shankar Raja compoese music for this movie, while Nirav Shah handles camera for this movie and editing is done by Gokul Chandran.
Plot
The core plot of Nerkonda Paarvai revolves around three girls Meera, Fathima, and Andrea (Shraddha, Abhirami, Andrea) who find themselves in a pretty tense situation when they have been falsely accused of a crime by the gang of by boys Adhik, Venky and Viswa (Arjun, Aswin, Adhik). They find a savior in Bharat Rangaswamy (Ajith Kumar), who is an advocate suffering from stress issues and bipolar disorder. On the other side Sathyamoorthy (Rangaraj Pandey) appear for the boys.
The court announces a verdict based on the lawyers Bharat and Sathyamoorthy's argument and what is the verdict on the case is the climax of the movie.
Release
The movie shoot kickstarted with the initial pooja (prayer) on 14th December 2018. The first look of the movie with the title was released on March 4, 2019. The movie released on Aug 8, 2019. Nerkonda Paarvai trailer released on 12th June 2019.