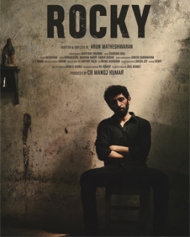 Rocky is a Tamil revenge action drama movie directed by Arun Matheswaran. The movie produced by C.R. Manoj Kumar under RA STUDIOS. The movie stars Vasanth Ravi and Bharathiraja in the lead roles while Raveena Ravi, Rohini essay supporting roles. The soundtrack was composed by Darbuka Siva. The cinematography and editing was handled by Shreeyas Krishna and Nagooran respectively.
Story
The movie story is about Rocky (Vasanth Ravi) and Manimaran's (Bharathiraja) ego clash which results in a series of deaths. Rocky, released after 17 years from prison, goes back to his childhood house, searching for his missing sister Amudha (Raveena Ravi). Also, he doesn't want to get trapped in violence. But the situation pushes Rocky into it again. What happens next? Is the rest of the story to be watched on the big screen.