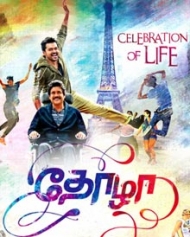 Thozha (aka) Thola is an Indian bilingual movie directed by Vamsi Paidipally which is simultaneously being shot in Tamil and Telugu languages.
The movie Produced by Prasad V Potluri under the banner PVP cinema, it features Akkineni Nagarjuna and Karthi playing the male leads, the film being the latter's first straight Telugu film. Tamannaah plays the female lead.
Detailed Story Of Thozha
The Thozha movie story is about the friendship between the two men is then told as a flashback: Nagarjuna wealthy quadriplegic (paralysis caused by illness) and his assistant Tamanna, are interviewing candidates to be his live-in caregiver.
Karthi, a candidate, has no ambitions to get hired. He is just there to get a signature showing he was interviewed and rejected in order to continue receiving his welfare benefits. But he got select to take care Nagarjuna.
Check out the super cool photos of Tamanna from THOZHA
Next day Karthi returns and learns that he is on a trial period for the live-in caregiver job but without interest. Later learns Nagarjuna's disability and accompanies him in every moment of his life, assisting him in all the ways needed.
Nagarjuna discloses the reason behind his paralysis and how he lost his wife in a Paragliding accident. Later Karthi gets close to his boss and took more care of him. Days ran Nag got to know that Karthi has to be with his family and releases him from his job, suggesting he may not want to push a wheelchair all his life.
The rest of the story to be watched on big screen, which is narrated with the highly emotional screenplay.
Music
Gopi Sunder composes the film's music. Production began on 11 February 2015 at Hyderabad and principal photography began on 16 March 2015 at Chennai.