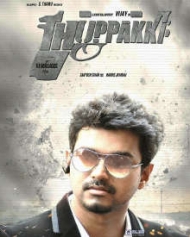 U | Action Thriller
Release Date : 13 Nov 2012
Cast : Vijay, Kajal Aggarwal
Director : A.R. Murugadoss
Synopsis
Thuppakki is an action thriller movie revolving  around a youngster from a Mumbai-based Tamil family and his decisions he takes after his life undergoes a sudden turn.

Kajal Aggarwal has a meaty role in Thuppakki. Her role is not limited to be an arm-candy of Vijay in Thuppakki. Well, she will be seen in the role of a boxer in the film. She plays the role named Nisha, an iron-willed girl. However, the actress will also be seen in glamorous avatars.

And the story goes like this - Jagadish, an army men and a secret agent of DIA (Defence Intelligence Agency), returns to Mumbai on leave. His parents wants him to tie the knot with a girl chosen by them. He meets Nisha (Kajal Aggarwal), a boxer.

Jagadish spoils the plan of a serial bomb blasts with the...